What to look for.

A guide to finding the true first edition. 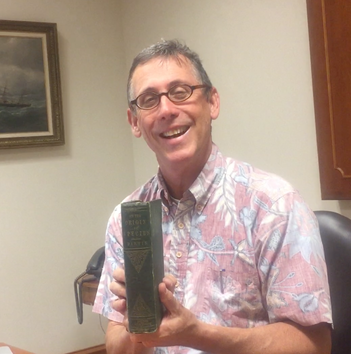 Dan Lewis of the Huntington Library walked us through what book experts typically look for.
What makes the first edition On the Origin of Species so special? The first edition of this book was published and distributed in London of 1859 by John Murray. There are a recorded 1,250 copies of the first edition to have sold out before its release because of preorders. The very existence of the physical copy along with its content makes for a valuable and special work that proves to have influenced and changed how human beings see the world.

Given its birth year, each first edition copy of Origin of Species have gone through many journeys throughout time that adds to its history and value. But one must wonder, what makes one first edition copy different than another? Each copies have gone through the hands of different people, some of whom are Darwin’s contemporaries, that could have possibly annotated in the book. Annotations in each book are what makes each copies different and fascinating because of the endless possible interpretation the annotations can tell us as readers. By analyzing the annotations, scholars are provided with more resources to possibly better understand Darwin’s initial belief of his theory in natural selection.

So how do you, a non-book expert, identify a first edition On the Origin of Species and what should you look for in the physical copy of the book?

​According to the Darwin’s Census guide by the University of Cambridge, there are a number of things an expert looks for to identify whether a copy is a first edition. The most simplest way is to look at the date in the title page.

​With the exception of a rumored few second edition with the date 1859, the first edition will have this date on the title page: 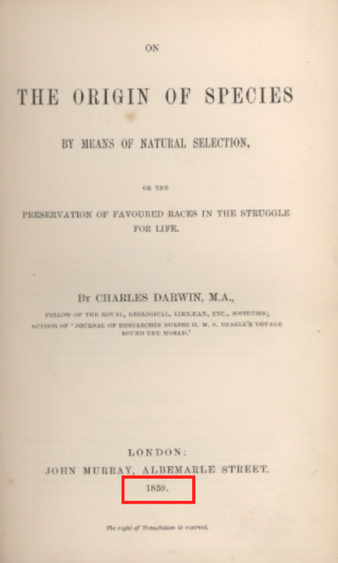 Next, experts will generally look at the physical condition of the binding itself. The book as a piece of book production is cross binding. The original cover is made of green cloth embossed with design in the front and back cover and is gold-stamped in the spine. The second and third edition binding is quite similar to the first with key differences found in the words “London, John Murray” in the spine. Key variants can be found on page 2 of the Darwin Census Guide. 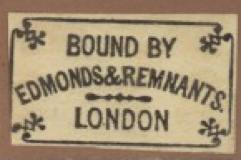 ​In addition to the first two characteristics of a first edition book, the first edition will also most likely have a small rectangular binder’s ticket pasted in the inside back cover of the book labeled  “BOUND BY | EDMONDS & REMNANTS | LONDON”.
Other notable differences in the first edition is listed below as well as interesting things to look for by an expert:

1. Advertisements sewn in the back throughout time
2. Page 502 is a long folded chart
3. The world evolution is never used in the book except for the last page “something something have been and are being evolved”
4. Page 20, line 11, species is misspelled as "speceies"
5. Crush lining on the inside of spine sewn by machine
6. Annotations